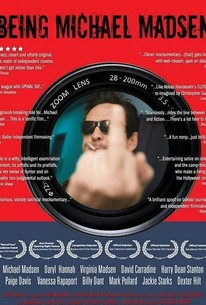 A movie star who is reeling from the pressures of celebrity tries to show the media just how it feels in this independent satiric comedy. Michael Madsen stars as Michael Madsen, a wildly popular motion picture actor who has started to emotionally buckle under the stress of his fame and success, often making a spectacle of himself in public. The tabloid press follows him relentlessly, waiting to capture one of his emotional outbursts on film and printing groundless stories accusing him of everything from secret gay romances to the murder of a young actress. Madsen finally decides he's had enough, and decides to give photographer, yellow journalist, and chief antagonist Billy Dant (Jason Alan Smith) a taste of his own medicine by hiring three documentary filmmakers (Davis Mikaels, Doug Tompos and, Kathy Searle) and having them follow Dant as closely as Dant has been following him. Madsen's plan might work a bit better, however, if he'd teamed up with a less inept team of documentarians. Being Michael Madsen also includes mock-interviews with colleagues David Carradine, Harry Dean Stanton, Daryl Hannah, and Virginia Madsen (the latter of whom is also Michael's sister).

Critic Reviews for Being Michael Madsen

Audience Reviews for Being Michael Madsen

There are no featured audience reviews for Being Michael Madsen at this time.