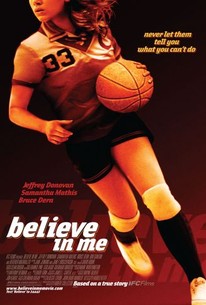 Believe in Me Ratings & Reviews Explanation

Believe in Me Photos

Director/screenwriter Robert Collector adapts Newberry Award-winning author Harold Keith's fact-based tale about a 1960s-era girl's basketball coach who inspired his athletes to believe in themselves and always strive to reach their greatest potential. Clayton Driscoll was an assistant boy's basketball coach when he accepted his first official coaching assignment in the tiny, backwater Oklahoma town of Middleton. An urbanite whose devoted wife Jean is wholly supportive of the move, Clayton hopes that the peace of the country will give the couple the opportunity to start a family. Upon discovering that the team he is set to coach is a girl's team, however, Clayton's enthusiasm immediately sours. In the mid 1960s, in the middle of nowhere, girl's athletics could barely qualify as an afterthought to sports fans. The Middleton Lady Cyclones in particular, were an unmitigated laughing stock. Though Clayton is at first flushed by the ineptitude of his young players, his dubiety is soon tempered by the remarkable character displayed by the girls who want nothing more than to shine in the eyes of their coach. Upon recognizing the decency and resiliency displayed by his tough-minded team, Clayton gives the girls permission to become as passionate about the game as any boy would be. But not everyone in Middleton is so eager to see these young women behaving as aggressively and competitively as their male counterparts, and as Clayton liberates the girls in an attempt to take the state championships and in the process finds himself emancipated by his love for the team, town rainmaker Ellis Brawley launches a bitter campaign to bring about the progressive-minded coach's downfall.

Sean Dugan
as The Heckler

Jennifer Strebeck
as Wanda
View All

Critic Reviews for Believe in Me

Audience Reviews for Believe in Me

Believe in Me Quotes