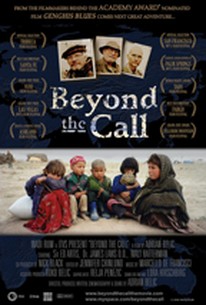 Knightsbridge International is a charitable organization with a difference. Founded and operated by Ed Artis, Jim Laws, and Walt Ratterman, three Americans who are also members of the Knights of the Order of Malta (a religious and fraternal organization whose motto translates as "Defense of the Faith and Assistance in Time of Suffering"), Knightsbridge International brings needed food, medicine, and other supplies to poor and desperate people in some of the most dangerous places on Earth. On top of frequently flying into places devastated by natural disasters or caught in the midst of war, Artis, Laws, and Ratterman receive no compensation for their time-consuming and sometimes risky work. Operating through private donations, Knightsbridge doesn't even take expense money for its work, and purposely focuses its energies on places where other charitable organizations are afraid to go. Beyond the Call is a documentary which profiles the three unlikely heroes behind Knightsbridge International and follows them on some of their missions of mercy. Beyond the Call received its world premiere at the 2006 Tribeca Film Festival.

There are no featured audience reviews for Independent Lens at this time.