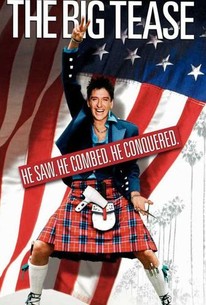 The Big Tease may be predictable, but the buoyant performances keep you laughing once you give in to the silliness.

Craig Ferguson, best known to American audiences as Mr. Wick, the conniving boss who loves to fire people on The Drew Carey Show, co-wrote and starred in this mock-documentary about Crawford Mackenzie, Scotland's leading hairdresser. When Crawford receives an invitation to Los Angeles for the World Freestyle Hairstyling Championships, he eagerly hops the first flight to America, with a camera crew in tow to record his triumphant debut in the States. Once he arrives, he learns that he was invited to attend and observe but not to compete. Crawford is at first dejected, but he refuses to take the humiliation lying down; one way or another, Crawford is determined to show off his talents for the greater glory of Scottish hair styling. The supporting cast includes Mary McCormack, Sara Gilbert, Larry Miller, and Charles Napier; director Kevin Allen previously helmed the offbeat Scottish comedy Twin Town.

Drew Carey
as himself

Cathy Lee Crosby
as Herself

David Hasselhoff
as himself

Caitlyn Jenner
as himself

Veronica Webb
as As Herself

Jose Eber
as As Himself

Elois Dejoria
as Judge No. 2

Giuseppe Franco
as Judge No. 3

Sascha Ferguson
as Judge No. 4

Millie Gervasi
as Judge No. 5

Sergio Brie
as Ronnie the `Beefeater'
View All

Critic Reviews for The Big Tease

Audience Reviews for The Big Tease