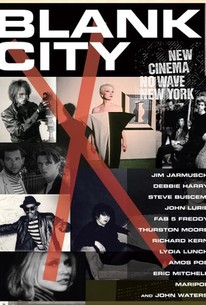 Before there was HD there was Super 8. Before Independent film there was Underground Cinema. And before New York there was...well, New York. Once upon a pre-Facebook time, before creative communities became virtual and viral, cultural movements were firmly grounded in geography. And the undisputed center of American - some would say international - art and film was New York City. In particular, downtown Manhattan in the late 1970's and 80's was the anchor of vanguard filmmaking. BLANK CITY tells the long-overdue tale of the motley crew of renegade filmmakers that emerged from an economically bankrupt and dangerous period of New York History. It's a fascinating look at the way this misfit cinema used the deserted, bombed-out Lower East Side landscapes to craft daring works that would go on to profoundly influence Independent Film today. Unlike the much-celebrated punk music scene, this era's thrilling and confrontational underground film movement has never before been chronicled. Directed by French newcomer Céline Danhier, BLANK CITY captures the idiosyncratic, explosive energy of the "No Wave Cinema" and "Cinema of Transgression" movements. Stark and provocative, the films drew name and inspiration from the French New Wave; as well as Film Noir, and the works of Andy Warhol and John Waters. Filmmakers such as Jim Jarmusch, Eric Mitchell, Beth B, Charlie Ahear, Lizzie Borden and Amos Poe showcased the city's vibrant grit and bore witness to the rising East Village art and rock scenes and the birth of hip hop. Short, long, color or black-and-white, their stripped-down films portrayed themes of alienation and dissonance with a raw and genuine spirit, at times with deadpan humor blurring the lines between fiction and reality. --(c) Insurgent Media

Critics Consensus: Arthur Is On The Rocks
View All