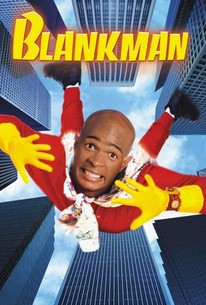 Are you ready for a new kind of superhero -- a thirty-something virgin in long underwear? Darryl Walker (Damon Wayans) is a bright but socially inept man with a gift for inventing things but little skill for functioning in the real world. His brother Kevin (David Alan Grier) works on a low-class tabloid news show featuring beautiful anchorwoman Kimberley Jonz (Robin Givens), whom he secretly loves. The Walkers live in Metro City, Illinois, a city that's been hit with a massive crime wave after the mayor is kidnapped by gangsters. After his grandmother is killed, Darryl builds a collection of crime-fighting robots from household junk, invents bullet-proof long underwear (made from his grandmother's old housecoat), and becomes Metro City's newest crime fighter, Blankman. Blankman's escapades put fear into the heart of mob boss Michael Minelli (Jon Polito), and when Kevin turns out to have an inside track on Blankman's activities, it brings him closer to Kimberley. But how long can a superhero with no superpowers last against the forces of organized crime? Damon Wayans wrote the original story for Blankman as well as co-writing the screenplay and playing the title role, which was based in part on his "Handi-Man" character from the TV comedy series In Living Color. ~ Mark Deming, Rovi

Nicky Corello
as Sammy the Blade

Joe Vassallo
as Tony the Match

Brad Lafave
as The Reporter

Gordon McClure
as Man of God

Arsenio Hall
as Himself