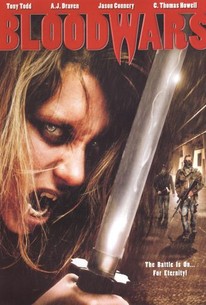 A laid back college student who favors quiet gatherings with close friends over wild nights out on the town finds himself at the center of a centuries old war between vampires and mortals in this low-budget frightener starring Tony Todd and C. Thomas Howell. Will is an average college student whose low-key lifestyle is about to get more interesting than he could ever imagine. After being bitten by a vampire seductress whose clan secretly scours the campus for fresh blood, Will begins to make a startling transformation. Meanwhile, among the legions of the undead, powerful coven leader Julian (Todd) is looking to name a successor to the throne. In order to qualify for such an honor, however, a vampire from Julian's coven must first hunt and kill a sentry. The sentries are an elite order of vampire hunters who have been quietly keeping humanity safe from the vampire threat for millennia, carefully maintaining the delicate balance between good and evil. Suddenly, a college student who never thought he would amount to anything finds himself at the center of a supernatural war between the world he once knew, and the secret society that he never knew existed.

There are no critic reviews yet for Blood Wars. Keep checking Rotten Tomatoes for updates!

There are no featured audience reviews for Blood Wars at this time.