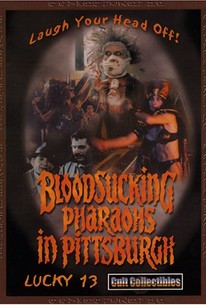 This daffy, hit-and-miss gore comedy was apparently conceived as a parody of Herschell Gordon Lewis' splatter landmark Blood Feast, which, frankly, represents too easy a target. There are no actual Pharaohs involved, only a crazed figure in a fez who roams the streets of Pittsburgh slicing, axing and chainsawing naughty ladies of the night, then absconding with various stolen body parts. The killings mimic the M.O. of a Las Vegas-based occult serial killer who was shot dead by a slouchy cop (Joe Sharkey) more than a decade ago -- a cop who has been haunted by the case ever since. A trip to Pittsburgh's Egyptian district leads our hero and a butt-kicking meter maid (Susann Fletcher) smack into the killer's hideout, where a bloody battle to the death ensues. It's clear the filmmakers intended this to be either a wild, Airplane!-style take on splatter movies or a frenetic, comic gorefest a la Peter Jackson's Dead Alive, but the story and direction lack wit or creativity enough for either one. Nevertheless, there are some outstanding moments of grim humor (particularly a subplot involving a quit-smoking clinic) and audacious makeup effects from local boy Tom Savini. Some promotional materials have replaced director Dean Tschetter's name with familiar DGA pseudonym "Alan Smithee." ~ Cavett Binion, Rovi

Pat Logan
as Lober
View All

There are no featured audience reviews for Bloodsucking Pharaohs in Pittsburgh at this time.