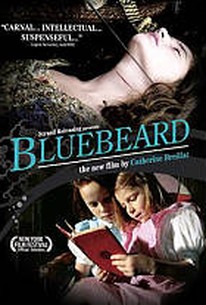 Controversial filmmaker Catherine Breillat puts a new spin on an ancient story in this multileveled drama. In France in the mid-'50s, Catherine (Marilou Lopes-Benites) enjoys toying with her older sister, Marie-Anne (Lola Giovannetti), by reading her the story of the murderous and oft-married Bluebeard, embellishing the story with plenty of gore and scaring the girl out of her wits. As Catherine rereads the story, we're taken back to the year 1697, as Lord Bluebeard (Dominique Thomas) prepares to make Marie-Catherine (Lola Créton) his seventh wife. Marie-Catherine's youth and innocence make her an especially attractive quarry to Bluebeard, and rather than murder her right away, he decides to wait a while in order to savor the terrible joy of claiming her life. However, as Bluebeard becomes caught in a cycle of events that keep him from following through on his wife's murder, the two slowly become something like a normal couple and Marie-Catherine begins to turn the tables on her spouse. Barbe Bleue (aka Bluebeard) received its world premiere at the 2009 Berlin International Film Festival. ~ Mark Deming, Rovi

Isabelle Lapouge
as Mother
View All

Critics Consensus: How to Train Your Dragon Is Certified Fresh
View All