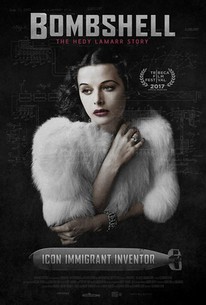 Inspiring and tragic, Bombshell is a bittersweet celebration and reclamation of Hedy Lemarr's journey from Hollywood legend to technology genius.

When Nazi U-Boats torpedo a ship carrying 83 school children during World War II, Hollywood movie star, Hedy Lamarr, decides to exact revenge. At night, after shooting her scenes on set, she works on a secret radio system that will allow the Allies to torpedo Nazi U-Boats with deadly accuracy. Her sketches remain ideas until a chance encounter with an eccentric composer enables her to transform them into useful technology. The secret communication system she creates is groundbreaking and eventually changes the course of history. It would make a terrific fictional film, but this story happens to be true. Hedy Lamarr, the screen siren who was called "the most beautiful woman in the world" and starred alongside Hollywood giants like Spencer Tracy, Jimmy Stewart and Clark Gable, invented a wireless form of communication called "frequency hopping" that revolutionized mobile communications all over the world, a feat that would directly lead to the creation of secure communications for wireless phones, Bluetooth, GPS and WiFi technology itself

There are no featured audience reviews for Bombshell: The Hedy Lamarr Story at this time.