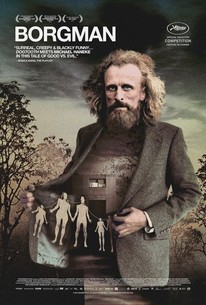 Borgman's unpredictability may confound as many viewers as it enthralls, but either way, it's a refreshingly original experiment in off-kilter terror.

Modern day Europe: A priest and his companion hunt silently through the fields, accompanied by a braying dog. They are armed and deadly. Their quarry is Camiel Borgman, living in military sparseness in an underground den, near companions Ludwig and Pascal. Camiel scrapes out with some difficulty, hitching a ride with a doomed truck driver on a relentless trip to the heart of suburbia. He passes by two odd women, Brenda and Ilonka, with whom he seems to share a history. When a dirty Camiel arrives at the door of artist Marina and media executive Richard's expansive, designer-chic home, the shifting perceptions of Van Warmerdam's screenplay begin to displace and disorient the audience. Hallucinogenic elements dot the consciousness as Camiel shifts between the roles of victim and aggressor. He asks for a bath. He toys with Richard's jealousy. He is viciously beaten up by his cruelly intolerant host and left wounded on the floor. Marina seeks to assuage her guilt by allowing him a space for the night. She treats his wounds. She makes him some food. She begins to deceive her husband. And Camiel Borgman insistently starts to install himself in the house as his dark advances ebb and flow, push and pull. Marina is self-obsessed; Richard a casual racist; they employ a nanny Magot to look after their three small children, the youngest of whom, Isolde, sees Camiel early on and is responsive to his presence. "There is something that surrounds us," says Marina, fearfully, but she is no longer in control. Large dogs roam casually through the house. There are flashes of something sinister in the garden as Camiel waits, and watches. Soon he is inhabiting Marina's dreams. "Couldn't you come back in another capacity?," she asks him. "I could," he says, "...but it will have consequences." (c) Drafthouse

Critics Consensus: Edge of Tomorrow is Certified Fresh
View All