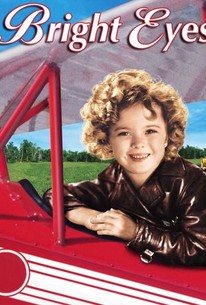 Despite stiff competition like Poor Little Rich Girl and Heidi, Bright Eyes is arguably the best of Shirley Temple's 1930s vehicles. The little curly-top is cast as Shirley Blake, daughter of Mary Blake (Lois Wilson), the widowed housemaid of snooty J. Wellington and Anita Smythe (Theodore Von Eltz and Dorothy Christy). Though continually terrorized by the Smythe's obnoxious, doll-destroying daughter Joy (Jane Withers), Shirley finds comfort in the fact that she is the darling of the airplane-pilot buddies of her late father. Especially fond of our heroine is flyboy Loop Merritt, who arranges a birthday party for the girl. Alas, even as Shirley sings "On the Good Ship Lollipop" to a gathering of beaming airmen, her mother Mary is run over by a car while shopping for her daughter's birthday cake. It thus becomes Loop's painful duty to tell Shirley that her mother "cracked up," just like her father did (if this scene doesn't move the viewer to tears, the viewer is made of granite). Fortunately, the Smythe's irascible Uncle Ned takes a liking to Shirley, securing her financial future at the expense of his repulsive relatives. But before this happy ending can come about, Shirley must be rescued from an imperiled passenger plane by the resourceful Loop. Though Shirley Temple is inarguably the main drawing card in Bright Eyes, 9-year-old Jane Withers is equally terrific as the pint-sized "villainess"; indeed, some critics felt that Withers stole the show, and it was this as much as anything else that earned Withers her own starring series at 20th Century-Fox.