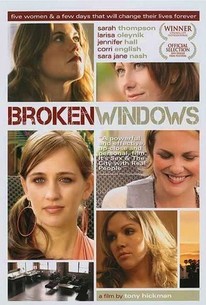 Five women faced with monumental life choices prepare to make the decisions that will resonate through the rest of their lives in director Tony Hickman's reflective drama. Sara is a photographer whose artistic eye has helped her to launch a successful career as a professional photographer. But these days Sara is inundated with commercial work, and photography has become just another job. Though her best friend challenges Sara to get back to her roots, it begins to appear as if he has ulterior motives. Meanwhile, Amy is still reeling from a life-changing loss when her father gets her to throw a party, and struggling actress Katie is attempting to decide whether to end her relationship with a more successful albeit less stable actor in order to keep her career on track. Later, introverted psychologist Beth begins to open up in ways she never thought possible while attending a party thrown by one of her patients. Each of these conflicts will ultimately be defined by a choice that will help to form a new reality for these women. Whether that reality will be positive or negative remains to be seen.

There are no critic reviews yet for Broken Windows. Keep checking Rotten Tomatoes for updates!

There are no featured audience reviews for Broken Windows at this time.