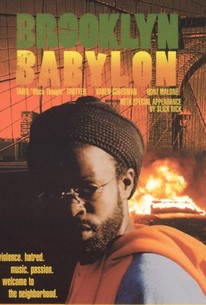 Two young people from different cultures fall in love and have to face the emotional fallout of their actions in this urban drama set in Brooklyn's rough-and-tumble Crown Heights neighborhood. Sol (Tariq Trotter) is a young man of West Indian descent who is the leader of a group of Afrocentric hip-hop musicians struggling to succeed in the recording industry. Sol and his friend Scratch (Bonz Malone) get into an auto accident one afternoon with Judah (David Vadim), a young Jewish man out for a drive with his girlfriend Sara (Karen Goberman). While Judah and Scratch get into an argument, Sol and Sara attempt to deal with the problem more reasonably, and the two find they have an unexpected rapport. Sol and Sara become fast friends, and their friendship soon grows into a romance, but Sara finds that Judah is both angry and heartbroken about her new relationship, while her conservative family does not trust Sol. Sol's friends, meanwhile, are no more supportive of him, believing he's betraying his culture by becoming involved with Sara. Leading man Tariq Trotter (also known as Black Thought) is the frontman of the acclaimed hip-hop group the Roots, who appear in the film as Sol's band and perform several original compositions for the soundtrack. Brooklyn Babylon received its world premiere as an opening night attraction at the 2001 Slamdance Film Festival, where it was screened over the objections of the film's distributor, Artisan Pictures.

Ahmir "Questlove" Thompson
as Member of The Lions

James 'Kamal' Gray
as Member of The Lions

Leonard 'Hub' Hubbard
as Member of The Lions

Kyle 'Scratch' Jones
as Member of The Lions

Spragga Benz
as Himself

Yossi Piamenta
as Himself
View All

There are no featured audience reviews for Brooklyn Babylon at this time.