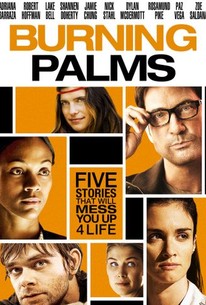 BURNING PALMS is a subversive tale that interlaces five stories where no taboo is left unexplored. Framed as a graphic novel come to life, the film unfolds in five popular neighborhoods of Los Angeles as each character careens toward a dark and often comic fate. Santa Monica: Dennis Marx (Dylan McDermott) and Dedra Davenport (Rosamund Pike) are waiting at the airport for Dennis' 14-year-old daughter Chloe (Emily Meade). From the second she arrives it is clear that she and her father do not have a conventional relationship. Dedra becomes so distraught and jealous that she kills herself. Westwood: Ginny Chen (Jamie Chung) and Chad Bower (Robert Hoffman) are a young couple in love. When Chad asks Ginny for an unusual sexual request, Ginny continually feels shame for her sin, punishing herself through self mutilation. West Hollywood: Geri (Peter Macdissi) and Tom (Anson Mount) are life partners, though they could not be more different. The two adopt a little girl from Africa named Mahogany (Tiara McKinney), but when the little girl doesn't meet their expectations of how they feel she should act, they abandon her in a state forest. Holmby Hills: Nicholas (Austin Williams), Trevor (Jake Austin Walker), and Colby Pinter (Addison Black) are three brothers who love making mischief and are raised by their pot smoking nanny Mary Jane (Lake Bell). When the household maid Blanca's (Paz Vega) dead child's umbilical cord goes missing, the three boys hold a trial in which a deep secret is revealed about the death of Blanca's baby, which probes Blanca to kill herself. In Sherman Oaks, Sarah Cotton (Zoe Saldana) is a young woman who finds herself a victim of rape. When her rapist flees, he leaves behind a crucial part of his identity: his wallet. Sarah tracks down Robert G. Kane (Nick Stahl) to a local pizza place. Instead of turning him in, Sarah wants him to rape her again. The underlying story beneath Burning Palms' five featured stories, is the different kinds of people who live in the unique neighborhoods that make up the entertainment capital of the world: Los Angeles. There have been previous films similar in design, but their separate storylines always intersect at the end. Burning Palms defies those expectations by keeping the stories separate and distinct. The only commonality is the presence of the "bag lady." There have also been many Los Angeles based films that speak to the 'magic' of Hollywood where struggling underdogs venture, and through twists of fate, make it big. But there is one aspect that is often overlooked and ignored in Hollywood: the average person. This film gives a good look at the people who aren't gracing magazine covers or starring on the big screen. Yet despite having average lives, these people prove that maybe they have a little bit Hollywood magic of their own-showing the world that nothing is ever like it seems. -- (C) New Films

Ross Thomas
as Lukas 'The Waiter'