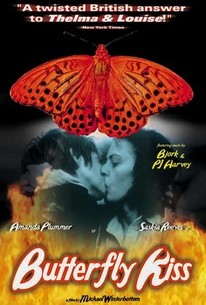 This unsettling variation on Thelma and Louise (1991) is an unusual and often macabre love story/black comedy about two peculiar women, played by Amanda Plummer and Saskia Reeves, who roam through Northern England on a killing spree. Plummer is Eunice, a tattooed, schizophrenic free spirit who is wandering in search of her recently departed lover, Judith. She leaves one gas station attendant dead when the person admits to not being Judith. But when she meets Miriam (Reeves), another gas station attendant who longs for love and attention, Eunice doesn't ask the fatal question. Strangely captivated by the eccentric woman, Miriam spends the night with Eunice and falls under her peculiar charm, Calling each other "Eu" and "Mi," they hit the road, where they murder anyone who gets in their way. Both women sense that their actions will ultimately bring about a tragic end, but their dedication to their cause (rebelling against men who trivialize and demean women everywhere) and their love for one another gives them the strength to carry on. Though Plummer's Eunice seems to have the upper hand through most of the film, it is the sacrifice that "Mi" makes for "Eu" that catches and holds the viewer at the conclusion of this bizarre little tale. ~ Don Kaye, Rovi

Kelly
as Kelly
View All