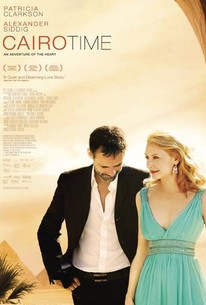 Though potentially too slowly paced for some, Cairo Time lingers long after the closing credits, largely due to a wonderful performance by Patricia Clarkson.

Juliette (Patricia Clarkson), a magazine editor, travels to Cairo to meet her husband, Mark (Tom McCamus), a UN official working in Gaza, for a three week vacation. When he is unavoidably delayed, he sends his friend Tareq (Alexander Siddig), who had been his security officer for many years, to escort her throughout the beautiful and exotic city. The last thing anyone expects is that they will fall in love. Cairo Time is a love letter to a city intertwined with a love story about a woman. It began when Syrian-Canadian writer/director Ruba Nadda first visited Cairo with her family many years ago. Returning a decade ago with one of her sisters, (and no longer under the protective eye of her father) they had memorable adventures. "The city was beautiful and the people were beautiful," Nadda recalled. Having lived in Damascus, and subsequently traveled the world, Nadda never forgot the grandeur and the chaos of this ancient city that was originally settled in Paleolithic times. Sitting at the border of what was once Upper and Lower Egypt, the area that was to become the metropolis of Cairo has played host to the Greeks, Romans, Crusaders, the Ottomans, Napoleon, and the British and is now one of the most densely populated cities in the world. "I remember the city being alive. It's gritty and historical and seething with humanity and I just had to capture it on screen." Truly, a journey through Cairo is a journey through time and it awakens your soul. It was during Nadda's many trips to international film festivals with her 14 short films and her previous feature, Sabah, that she came to appreciate the feelings of introspection and melancholy that traveling alone engenders. From these experiences came Cairo Time, something Nadda deems a "real love story, but one that is very un-West because to me the West is about acquiring, accomplishing, deadlines and running, running, running. The central character, Juliette, is suddenly forced to slow down and move on Cairo time." This film has a West-meets-East quality to the unexpected, unrequited love between an Arab man and a North American woman. It's also a throw to old style, classic films reminiscent of the restrained, emotional tension in the work of Jane Austen. Juliette is a woman who married young and still ardently loves her husband, Mark, who works abroad. Their children have grown up and moved away. Life, doing what it usually does to a marriage, has replaced their hopes and dreams with accomplishment and responsibilities. In the back of her head, Juliette had thought that sooner or later, she and her husband would have time for each other, which was the reason for her trip to Cairo. "I love this woman," explained Nadda. "She is quiet. And she has a sadness that's just under the surface which comes from a lifetime of being by herself a lot because she's been stood up by a husband whose work has often taken priority." Unable to meet Juliette when she lands, but knowing that she is an independent woman who is likely to head off on her own, Mark asks Tareq to care for her. For years, Mark had trusted Tareq with his own life, so it made sense to extend that trust to Juliette's wellbeing. Once at the hotel, Juliette is alone again. Unwilling to wait quietly for her husband's arrival, every effort she makes to venture out on her own is rebuffed. Cairo is not a gentle city. With a population of 17 million, the noise is unbearable. The heat, mixed with dust, is oppressive. Traffic does not adhere to lanes or stop lights. And women, particularly foreigners, do not easily move about in public alone. Quickly, Juliette learns that the simple activities of everyday living in Canada, like walking across the street, become a test of wills in Cairo. And so she turns to Tareq who shows her first, Cairo, and then herself. -- (C) Official Site

Daniel Iron
as Golfer
View All