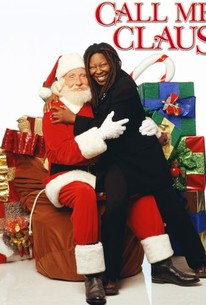 As a child, Lucy Cullins asked Santa Claus to bring her father home from Vietnam. But when her dad returned in a pine box, the embittered Lucy decided that Christmas -- and every other holiday for that matter -- was a humbug. Now all grown-up (and played by Whoopi Goldberg), Lucy is the hard-as-nails producer for the Shop-A-Lot Channel, a home-shopping cable service. While auditioning actors to play Santa Claus for a hokey Yuletide informercial series, Lucy hires a twinkly eyed old gentleman named Nick (Nigel Hawthorne), who, unbeknownst to everyone but the audience, is the genuine, bonafide "Ho Ho Ho" man himself. Facing mandatory retirement at age 200, Nick must find someone to take his place as Santa Claus for the next two centuries. The person he chooses in none other than Lucy Cullins -- and if she doesn't accept the job, the North Pole will melt, wreaking havoc upon everyone in the world, whether they're "naughty" or "nice." Originally conceived as a vehicle for a black man, Call Me Claus was reshaped as a showcase for Whoopi Goldberg when the actress signed on as co-executive producer. Also in the production lineup was country & western singer Garth Brooks, who penned a handful of new songs for the occasion. Call Me Claus debuted over the TNT cable network on December 2, 2001.

Bruce Vilanch
as Himself

Alex Dean
as Woman No. 1

Critic Reviews for Call Me Claus

Audience Reviews for Call Me Claus