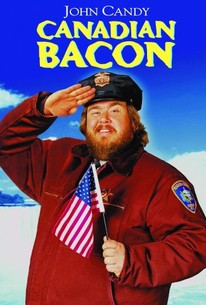 In Michael Moore's political satire, the U.S. president (Alan Alda) decides to wage a cold war against Canada in an attempt to reverse his slipping popularity, and, as a result, he drives a small group of incensed Canadians to take matters into their own hands. Alda is the first president in years not to lead his country into war, which naturally means that his approval rating is dangerously low. The sure-fire way to boost his popularity is to start a war and demonstrate American superiority. Unfortunately, as his advisors point out, the U.S. has run out of enemies. That is, until Alda's National Security Advisor Stuart Smiley (Kevin Pollak) happens to catch a segment on the news about a brawl at a Canadian hockey game that began when local American sheriff Bud Boomer (John Candy) made a remark about Canadian beer. This incident gives Smiley the notion to make the public believe that Canada is their new enemy. Determined to demonstrate the mighty power of America to the Canadians, Boomer gets a group of equally angry fellow Americans together to cross the border and perform the most serious of all Canadian crimes -- littering. However, the invasion is foiled and Boomer's numerous blunders threaten to turn a fabricated war into a real one. Written, directed, and produced by Michael Moore, Canadian Bacon takes lighthearted jabs at the differences between the U.S. and Canada, while also satirizing America's obsession with its military strength. The film features John Candy in his last complete screen performance.

Alan Alda
as President of the U.S.

Michael Woods
as State Trooper No. 1

Matt Cooke
as State Trooper No. 2

Tara Meyer
as Candy Striper No. 1

Fab Filippo
as Candy Striper No. 2

Stan Coles
as Secretary of State

Ben Hamper
as Redneck Guy No. 1