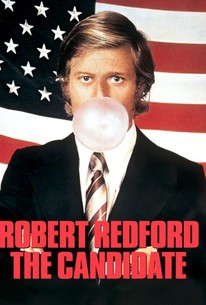 The Candidate may not get all the details right when it comes to modern campaigning, but it captures political absurdity perfectly -- and boasts typically stellar work from Robert Redford to boot.

Robert Redford stars in this gritty, documentary-like tale of an idealistic, good-natured attorney whose high standards are soiled by his run for political office. Having seen all the dirt in politics as a young man -- his father (Melvyn Douglas) was once governor of California -- Redford's Bill McKay has no interest in getting into the game himself. But a political operative named Luck (Peter Boyle) taps McKay to run against the seemingly undefeatable Senator Crocker Jarmon (Don Porter), a classic gasbag. McKay reluctantly agrees, but only if his father is not involved and he is allowed to say exactly what he wants, free of political or party constraints. As his candor causes his popularity to rise, the stakes become greater for McKay and the pressure to sell out grows. Jeremy Larner's adapted screenplay won an Academy Award and Redford delivers one of his best performances in a movie that, when viewed in the age of soundbite-and-poll-driven politicians, seems more timely than ever.

Jason Goodrow
as Boy in Commercial

George Meyer
as Man in Urinal

Natalie Wood
as Herself

Hubert H. Humphrey
as Himself

George McGovern
as Himself

John V. Tunney
as Himself

Sam Yorty
as Himself

Howard K. Smith
as Himself

Van Amberg
as Himself

Jesse Birnbaum
as Himself

Alan Cranston
as Himself

Maury Green
as Himself

Lu Hurley
as Himself

Robert H. Moretti
as Himself

Bill Stout
as Himself

Dick Whittington
as Himself

Ken Cory
as Himself

Judy Hayward
as Herself

Cedrick Hardman
as Himself

Fred Harris
as Himself

Ken Jones
as Himself

Grover Lewis
as Himself

Terence McGovern
as Himself

Harvey Orkin
as Himself

Jerry Waldie
as Himself

Jesse M. Unruh
as Himself

Critic Reviews for The Candidate

Audience Reviews for The Candidate