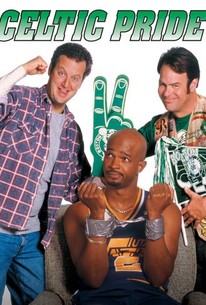 Two rabid Boston B-ball fans go over the edge and kidnap the star player of the Utah Jazz during the NBA playoffs in this goofy sports comedy starring veteran comic actors Dan Aykroyd, Damon Wayans and Daniel Stern. Aykroyd and Stern play the dim-bulbed fans, high school gym teacher Mike O'Hara, whose passion for basketball is destroying his marriage and Jimmy Flaherty, the owner of a plumbing business. Tired of watching the Celtics lose to the Utah Jazz during the playoffs, they go into an upscale bar one night and see Utah's superstar player/tv commercial pitchman Lewis Scott (Wayans). Scott is a class A arrogant hot dogger with a bad attitude (deep down he cares more for money than the sport that made him rich), making him a favorite with fans. Inspiration strikes Flaherty and O'Hara who proceed to cozy up to Scott and get him blind drunk. They too get ripped and the next morning the hung-over duo awaken to a surprise. There in Flaherty's living room sits a bound, gagged and angry Scott, whom they apparently kidnapped the night before. They decide to help their team and not let him go. So begins the bulk of the movie, a verbal, slapstick cat and mouse game between the basketball player and his two bumbling captors.

Deion Sanders
as Himself

Bill Walton
as Himself

Peter A. Hulne
as Pat Fitzsimmons

Will Lyman
as Rich Man

Ed 'The Machine' Regine
as Ralph

Larry Bird
as Himself

Bob Cousy
as Himself

Nicole Brathwaite
as Kid in Gym

Bob Haggerty
as Man in Bathroom
View All