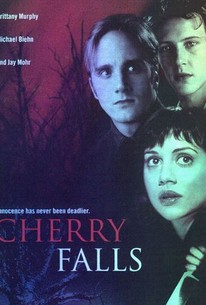 A serial killer with a difference is on the prowl in a small Virginia town in this darkly comic horror story. Brent Marken (Michael Biehn) is the sheriff of the city of Cherry Falls, a quiet community that suddenly has a big-city problem to contend with when Marken discovers a murderer is on the loose. The killer is targeting teenage girls who attend the local high school -- and his victims are all virgins. This causes no small amount of anxiety for Brent's teenage daughter Jody (Brittany Murphy), who is not as ready for intimacy as her boyfriend Kenny (Gabriel Mann). Brent has personal problems of his own to deal with; his relationship with his wife Marge (Candy Clark) has hit an impasse, and he shares a dark secret with Tom Sisler (Joe Inscoe), the principal of the high school. Cherry Falls marked the American directorial debut for Australian filmmaker Geoffrey Wright; the cast also includes Jay Mohr, Caroline Perreyclear, and Rick Forrester. Cherry Falls enjoyed its first theatrical engagements in the United Kingdom, several months after it was first slated to open in the United States, thanks in part to the difficulty the producers had with the MPAA in securing an R rating for the picture.

Steve Boles
as Father No.1

David Lenthall
as Father No.2

Steve Ayers
as Father No.3

Candy Aston-Dennis
as Mother No.1

Deborah Hobart
as Mother No.2

Beatrice Bush
as Mother No.3

Barry Privett
as Man at Restaurant
View All