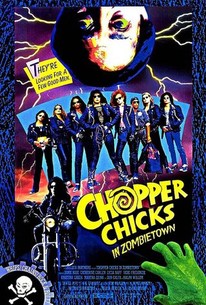 New York's Troma Films continue their grand tradition of relentlessly bad taste with this horror epic, which follows the exploits of an all-girl motorcycle gang -- who go by the quaint moniker "The Cycle Sluts" -- and their fearless leader Rox (Catherine Carlin), who offers the freedom of the road to any frustrated small-town girl willing to slap on the leathers. Things take a nasty turn for Rox and her violent femmes when the gang rides into Zariah -- a town in the slimy grip of a deranged mortician named Ralph (Don Calfa), who has been busily turning the locals into cannibalistic zombie slaves. As if that weren't enough... a busload of blind, orphaned teens become stranded within spitting distance of Ralph's undead army, and it's up to Rox's twisted sisters to save the day. Troma is often guilty of slapping outrageously goofy titles on not-so-funny films (e.g. Surf Nazis Must Die, Fat Guy Goes Nutzoid!, etc.), but this is something of an exception, with wonderfully sleazy performances, lots of zany energy and many clever references to zombie and biker-movie genres.

Ed Gale
as Bob the Dwarf

There are no featured audience reviews for Chopper Chicks in Zombietown at this time.