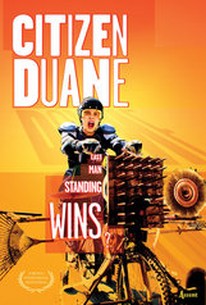 Indie director Michael Mabbott follows his debut effort, The Life and Times of Guy Terrifico, with a sophomore feature, the quirky underdog comedy-drama Citizen Duane. Douglas Smith plays Duane Balfour, one of the sons in a family known for fighting impossible battles against tremendous odds. When Duane loses his run for student council president, he vows to take on an even loftier mission: "Operation Infinite Justice," carried out against his sworn enemy, Chad Milton. Chad is the grandson of the local town bigwig, whose family extends its influence to every corner of the community. Duane's teacher, Miss Houston (Vivica A. Fox) discourages him, but he refuses to back down, and - in a last-ditch attempt to rid the town of the dark shadow that the Miltons cast over it - decides to run for mayor himself, backed by an eccentric relative, Uncle Bingo - a man notorious for once putting all of his money on a horse called 'Glue Factory.' First timers Jonathan Sobol and Robert Leskie penned the script; the picture co-stars Alberta Watson, Devon Bostick and Jane McGregor.

Vivica A. Fox
as Miss Houston

Christopher B. MacCabe
as Cecil Balfour

Lisa Ng
as Julie the Intern