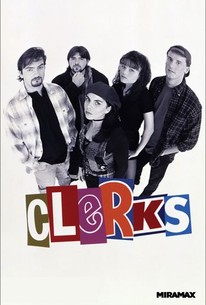 With its quirky characters and clever, quotable dialogue, Clerks is the ultimate clarion call for slackers everywhere to unite and, uh, do something we guess?

When Dante Hicks (Brian O'Halloran) is reluctantly put in charge of the Quick Stop market on his day off, he tries, though half-heartedly, to perform his minimum-wage duties as efficiently as possible. This gets tough amidst the on-going fight with his girlfriend, Veronica (Marilyn Ghigliotti), and his attempt to get back together with his ex-girlfriend, Caitlyn Bree (Lisa Spoonhauer). Meanwhile, his friend and alter ego Randall (Jeff Anderson) is working behind the counter of the adjacent video store -- at least when he feels like it. Randall's unabashed disdain of his place of employment, a long with his self-admitted hatred towards its customers is a sharp contrast to Dante's feeble attempts at the niceties of customer service. Much of the film consists of Randall and Dante's criticism of their customers, their lives, and the world in general. Clerks, filmed in black-and-white on a budget of only $27,000, began the career of writer director Kevin Smith, who would go on to make Mallrats (1995), Chasing Amy (1997), Dogma (1999), and Jay and Silent Bob Strike Back (2001). ~ Hal Erickson, Rovi

Ken Clark
as Administer of Fine

Chuck Dickel
as Stock in Chips Can

Mitch Cohen
as Leaning Against Wall/Angry Man at Door

Mike Belicose
as Customer with Diapers

Jane Kuritz
as Customer with Vaseline and Rubber Gloves

100 Fresh Movies You Can Watch for Free Online Right Now
New on Netflix in August
24 Frames: It Came From Sundance!
View All