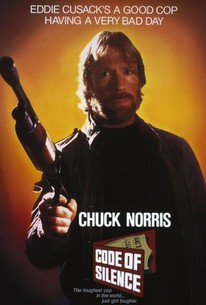 Not to be confused with the 1960 film of the same name, this fast-paced karate action flick stars Chuck Norris, still riding high on his karate film successes of the early '80s, and several years away from starting his popular Walker: Texas Ranger TV series. In this story he plays Eddie Cusak, a painfully honest police sergeant who just misses pulling off a drug bust -- it seems another gang got there before him, wiped out the competition, and made off with a fortune in white powder. A bad move -- this means nothing less than all-out war between the two rival gangs, with the police caught in the middle. Cusak has other problems as well, one of his team killed an innocent bystander during the raid and he is duty-bound to squelch any cover-up. With enemies on both sides of the law, he then has to take on the drug cartel with nothing more than cannons, machine guns, shotguns, pistols, a robot car, and other sundry artillery to help him out.

Dennis Cockrum
as Hood in Tavern

Don Pike
as Hood on Yacht

Catalina Caceres
as Grandmother at Hearing

Jerry Tullos
as Review Board Clerk

Critic Reviews for Code of Silence

Audience Reviews for Code of Silence