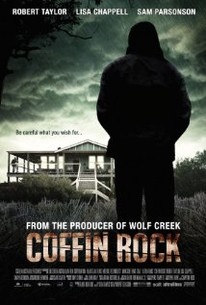 A drunken one-night-stand has potentially deadly consequences in this thriller from writer and director Rupert Glasson. Rob (Robert Taylor) and Jess (Lisa Chappell) are a married couple who run a general store in a small fishing village on the Australian coast. While Rob and Jess love one another deeply, they want to have children and their inability to conceive after three years of trying has caused tension to slowly build between them. One day, Evan (San Parsonson), a handsome young drifter, arrives in town looking for work. Jess gives him some odd jobs at the store, and the two strike up a friendship. One night, Jess sees Evan at a local tavern, and after a few drinks too many, they end up sleeping together. Wracked with guilt, Jess makes clear that she considers her infidelity to be a mistake and won't allow it to happen again. But Evan goes from being sweetly infatuated with Jess to becoming dangerously obsessed, and she's not sure how to get rid of him without letting her husband know what happened. However, Rob may find out whether Jess likes it or not when she discovers a few weeks after having sex with Evan that she's pregnant. Coffin Rock received its United States premiere at the 2009 Chicago International Film Festival. ~ Mark Deming, Rovi