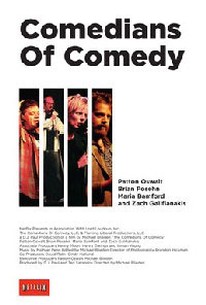 The Comedians of Comedy

The Comedians of Comedy Photos

Four comics take their offbeat brand of humor on the road in this blend of performance video and backstage documentary. Patton Oswalt, best known for his recurring role on the sitcom The King of Queens, wanted to stage a tour doing his standup material, but was hoping to avoid the strictures of time and material he ran into when playing comedy clubs. Looking for an alternative, he teamed up with friends and fellow humorists Brian Posehn (a former regular on Mr. Show and Just Shoot Me), Maria Bamford (who does cartoon voices in her spare time), and Zach Galifianakis (the star of a short-lived talk show on VH1), and booked a string of dates at rock clubs and college campuses across the country. The Comedians of Comedy features highlights from all four performers' best sets, as well as a glimpse of the ups and downs of life on the road and how they spend their spare time at home. The Comedians of Comedy also provided the jumping-off point for a Comedy Central television series featuring the same four artists.

News & Interviews for The Comedians of Comedy

Critic Reviews for The Comedians of Comedy

Audience Reviews for The Comedians of Comedy

The Comedians of Comedy Quotes