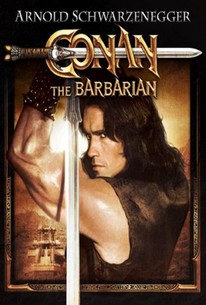 Though Conan may take itself too seriously for some, this adventure film about a former slave seeking vengeance is full of quotable Schwarzenegger lines and gritty action.

2:06
Conan the Barbarian: Official Clip - To Hell With You!

3:00
Conan the Barbarian: Official Clip - Knocking Out a Camel

2:40
Conan the Barbarian: Official Clip - Battle On the Ruins

John Milius's jingoistic direction and pulpy screenplay fit perfectly into this film version of the Robert E. Howard fantasy story of the sword and sorcery hero, Conan the Barbarian. Complementing Mulius's heavy metal production is Arnold Schwarzenegger's leaden acting, which in any other context would be deadly, but here (as in The Terminator) corresponds nicely with the whole sonorous project. The story begins when a horde of rampaging warriors massacre the parents of young Conan and enslave the young child for years on The Wheel of Pain. The Wheel of Pain seems to have as its only purpose the building up of Conan's muscles, so it's no surprise that one day Conan grows up to become Arnold Schwarzenegger. As the sole survivor of the childhood massacre, Conan is released from slavery and taught the ancient arts of fighting. Transforming himself into a killing machine, Conan travels into the wilderness to seek vengeance on Thulsa Doom (James Earl Jones), the man responsible for killing his family. In the wilderness, Conan takes up with the thieves Valeria (Sandahl Bergman) and Subota (Gerry Lopez). The trio comes upon a weird snake cult, linked to Doom, and Conan wants to trek off to Doom's mountain retreat to kill him. But he is prevented from doing that by King Osrik (Max Von Sydow), who wants the trio of warriors to help rescue his daughter who has joined Doom in the hills. ~ Paul Brenner, Rovi

News & Interviews for Conan the Barbarian

Critic Reviews for Conan the Barbarian

Audience Reviews for Conan the Barbarian