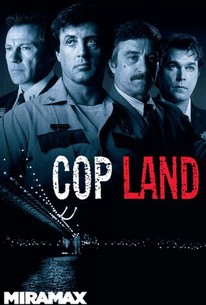 Cop Land matches its star-studded cast with richly imagined characters while throttling the audience with carefully ratcheted suspense, although it lacks the moral complexity of classic crime thrillers.

The second film from writer/director James Mangold, the corruption drama Cop Land stars Sylvester Stallone as Freddy Heflin, the much-denigrated sheriff of tiny Garrison, NJ, a community which -- thanks to a technicality -- is populated almost entirely by members of the New York City Police Department. When young cop Murray "Superboy" Babitch (Michael Rapaport) becomes embroiled in a controversial shoot-out which leaves two black youths dead, he apparently commits suicide rather than face the wrath of an official investigation. In reality, however, he flees to safety back home in Garrison. In the wake of the controversial events, NYPD Internal Affairs lieutenant Moe Tilden (Robert De Niro) arrives in Garrison to uncover the truth, attempting to enlist Freddy to help watch the watchmen, including Superboy's uncle, veteran cop Ray Donlan (Harvey Keitel); coked-out Gary Figgis (Ray Liotta); and Joey Randone (Peter Berg), the husband of the woman (Annabella Sciorra) Freddy loved and lost. A rich, complex film about redemption, Cop Land's portrayal of Freddy's struggles to prove his worth mirrors Stallone's own return to thoughtful, character-driven drama after years of vacuous action roles. Like Freddy, he faces an uphill battle, fighting for respectability in the face of a superb cast including Janeane Garofalo, Cathy Moriarty, and Paul Calderon. ~ Jason Ankeny, Rovi

Vincent Laresca
as Medic No. 2

David Butler (I)
as Thin Cop

Robert John Burke
as Officer B

Sean Runnette
as IA Detective No. 1

Ronn Munro
as Chief of Police

John Henry
as Officer in Alleyway

Richard Lisi
as Officer in Alleyway

Hans Moody
as Sergeant in Alleyway

Peter Wise
as Plaza Cop No. 1

Manuel Corrado
as Plaza Cop No. 3

Jeffrey Kaufman
as Plaza Cop No. 4

Europe Harmon
as Plaza Cop No. 5

Rene Ojeda
as Plaza Cop No. 6
View All