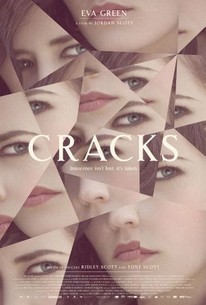 Atomospheric but not much else, Cracks is a formless film in search of compelling drama.

In an austere and remote all-girls boarding school, the most elite students are the illustrious members of the schools' diving team. Di (Juno Temple), Lily (Ellie Nunn), Poppy (Imogen Poots), Laurel (Adele Mccann), Rosie (Zoe Carroll) and Fuzzy (Clemmie Dugdale) are the envy of their fellow pupils who watch on as the girls compete for the attention of their glamorous teacher MISS G (Eva Green). MISS G in turn thrives on the attention she receives from her girls and believes it is her role to teach them the ways of the world. As Team Captain, DI is closest of all the girls to Miss G but her position is challenged when a beautiful Spanish girl, Fiamma (Maria Valverde), arrives at the school and joins the diving team. DI, pulls rank as team captain and lays down the rules in an attempt to assert her position but MISS G is spellbound by Fiamma's beauty and maturity and becomes obsessed with her new favorite girl. Consumed with jealousy, Di encourages the group to bully their team mate and they chase her out of the school. When Fiamma is made to return the girls are forced to try and get along with Fiamma and as they open up to her they too begin to warm to the charms that so captivated Miss G. In an attempt to put their differences aside - the diving team and Fiamma plan a secret midnight party to celebrate the feast of St. Agnes; a ritualistic celebration that is both innocent and erotic. A night that begins with high spirits soon takes a turn that will change the girls' lives forever as Miss G interrupts the evening and takes a drunken Fiamma away to her room... -- (C) IFC

Zoe Carroll
as Laurel
View All