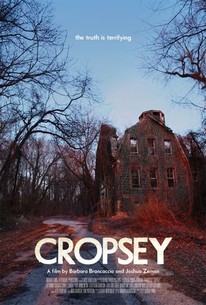 Staten Island filmmakers Joshua Zeman and Barbara Brancaccio reveal how an urban legend conjured up to keep kids from exploring abandoned buildings became a horrifying reality when a mysterious drifter began abducting children in their tight-knit urban neighborhood. Growing up, Zeman and Brancaccio were deluged with terrifying tales of Cropsy, a murderous mental patient prone to snatching children off the streets and taking them to the derelict buildings that were once part of the Willowbrook Mental Institution. Some claimed Crospey had a hook for a hand; others claimed his weapon of choice was a large axe. In 1987, that legend crossed the boundary into reality when 13-year-old Jennifer Schweiger vanished without a trace. Her disappearance sent shockwaves of fear through the community, but it was only the first. Before long Crospey had a name: Andre Rand. When a photo of a handcuffed Rand was released in the press, the public didn't need a conviction to know he was the man who had been preying on their children. In this film, Zeman and Brancaccio go back to the scene of the crimes to search for clues, and speak with the locals about how the case has haunted them for decades.

New Certified Fresh Movies on Netflix and Amazon Prime: E.T., Indiana Jones, Superman, and More
Shaun the Sheep and The Get Down Available on Hulu and Netflix This Week
Critics Consensus: Get Him to the Greek Is Certified Fresh
View All