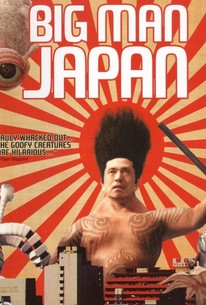 Director Hitoshi Matsumoto weaves this darkly comic mockumentary about a Japanese giant who continues the long-standing family tradition of facing off against Tokyo's most formidable monsters. Constantly caught in the middle of everyone's battles, Daisato finds his sincere efforts to keep the peace repeatedly belittled; he's divorced, his neighbors have covered his house in graffiti, and he gets nothing but dirty looks when he walks down the street. When we first meet Daisato, he is the subject of a television documentary. Though on the surface Daisato may seem like your average, slightly unkempt salaryman -- completely unremarkable in all respects -- it soon becomes apparent just how deceiving first impressions can be. After lamenting on camera the fact that he never gets any vacation time due to frequent calls from the Defense Department, the camera follows Daisato as he rides his motorbike to a Tokyo power plant, receives the jolt of electricity that transforms him into a hulking superhuman crime fighter, and clashes with a gargantuan leviathan intent on destroying Tokyo. Daisato comes from a long line of heroic heavyweights, yet while his ancestors were once championed with parades for their noble efforts, public interest in giant invaders has waned and Daisato has become something of a joke to the citizens of Tokyo. Not only is the noise generated by Daisato's battles regarded as a public nuisance, the property damage that he causes while defending the city has the citizens downright angry. Now, as Daisato attempts to balance his responsibilities to his ex-wife, his daughter, his agent, and his senile grandfather, the crushing weight of both his personal and professional obligations simply becomes too much to bear.

Hiroyuki Miyasako
as Stay With Me