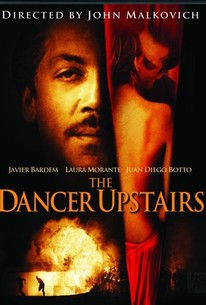 The Dancer Upstairs benefits from a talented cast and alluring intelligence, although pacing problems prevent this John Malkovich-directed mystery from reaching its full potential.

As a Latin American nation nears collapse under a highly organized terrorist movement, idealistic policeman Agustin Rejas faces the greatest challenge of his career: to catch the mysterious guerilla leader Ezequiel. The brains behind the bloody revolution that threatens to bring the government and entire country down, Ezequiel is as elusive as Rejas' superiors are corrupt--an irony not lost on Rejas, who left a career as a lawyer to try to find "a more honorable way of practicing the law." The military's response to the brutal tactics of Ezequiel's followers is equally ferocious, creating an atmosphere of mass panic. In the midst of the chaos, Rejas finds respite in Yolanda, his daughter's soulfully beautiful ballet teacher. But she, who appears to be a shelter from the storm, may in actuality be the storm's eye. As Rejas draws nearer to the man who considers himself to be the "Fourth Flame of Communism," he and the dancer he loves will be forced to choose between love, country and self.

Galo Urbina
as Indian No. 1 in Pick-up

Jairon Flores
as Indian No. 2 in Pick-up

Santiago Carlos Vellido
as Soldier No. 1

Frida Torresblanco
as Woman in Theatre

David Aguilar
as Boy with a Poster

Raquel Rocha
as Woman in Convertible

Alexis Rodrigues
as Man in Convertible

News & Interviews for The Dancer Upstairs

Critic Reviews for The Dancer Upstairs

Audience Reviews for The Dancer Upstairs