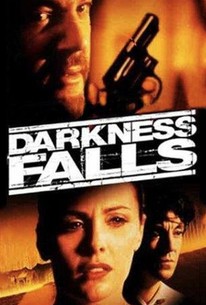 Smalltime racketeer Mark Driscoll (Tim Dutton) returns to his Isle of Man home on the eve of an important bit of economic thievery -- and if he fails by morning to make a substantial deposit into the account of a ruthless gangster, he's going to be English history. But when he gets home to his palatial estate he finds his beautiful wife, Sally (Sherilyn Fenn), in the company of an agitated neighbor, John (Ray Winstone), who has been secretly locking doors and disabling alarms when Sally wasn't looking. Once Mark enters, John makes his intentions ever so gradually clear as he begins a circuitous line of questioning regarding his comatose wife's recent car accident. Before they know it, Mark and Sally are bound, gagged, and forced to listen to a version of the accident that will forever change their lives.

Michael Praed
as The Hitman

Oliver Tobias
as The Money Dealer

There are no featured audience reviews for Darkness Falls at this time.