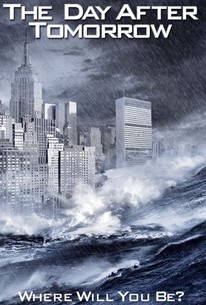 The Day After Tomorrow

The Day After Tomorrow is a ludicrous popcorn thriller filled with clunky dialogue, but spectacular visuals save it from being a total disaster.

The Day After Tomorrow Videos

The Day After Tomorrow Photos

What if we are on the brink of a new Ice Age? This is the question that haunts climatologic Jack Hall. Hall's research indicates that global warming could trigger an abrupt and catastrophic shift in the planet's climate. While Jack warns the White House of the impending climate shift, his 17 year-old son Sam finds himself trapped in New York City where he and some friends have been competing in a high school academic competition. He must now cope with the severe flooding and plummeting temperatures in Manhattan. Having taken refuge inside the Manhattan Public Library, Sam manages to reach his father by phone. Jack only has time for one warning: stay inside at all costs. As full-scale, massive evacuations to the south begin, Jack heads north to New York City to save Sam. But not even Jack is prepared for what is about to happen--to him, to his son, and to his planet.

Michael A. Samah
as Saudi Translator

Mimi Kuzyk
as Secretary of State

Dilva Henry
as Fox Newscaster No. 2

Robert Holguin
as Reporter No. 1

Suzanne Michaels
as Reporter No. 2

Leyna Nguyen
as Misc. Newscaster No. 1

Lina Patel
as Misc. Newscaster No. 2

Jesse Todd
as Scientist in Hallway

Matt Holland
as RAF Pilot No. 1

Greg Kramer
as RAF Pilot No. 2

Joel McNichol
as RAF Pilot No. 3
View All

News & Interviews for The Day After Tomorrow

Critic Reviews for The Day After Tomorrow

Audience Reviews for The Day After Tomorrow

The Day After Tomorrow Quotes