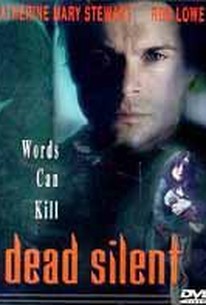 On the eve of her seventh birthday, little Amanda Meyer (Arlen Aguayo-Stewart) bears witness to the gory spectacle of her parents' murder. So traumatized is Amanda that she is struck mute, unable to communicate in any manner, though she does demonstrate affection towards her favorite doll. Though now under the care of her aunt and tutor Dr. Julia Kerbridge (Catherine Mary Stewart), Amanda is still not out of danger, thanks to sinister figures who intend to get their hands on her doll -- and to extract the valuable corporate secrets for which her parents were killed. Meanwhile, Julia begins to have her doubts about the sincerity of her handsome and convivial neighbor, Kevin Finney (Rob Lowe). Evidently inspired by the 1967 Audrey Hepburn vehicle Wait Until Dark, the made-for-cable Dead Silent debuted over the Lifetime channel on March 27, 2000 -- ironically the same night that ABC offered the premiere of the TV biopic The Audrey Hepburn Story. ~ Hal Erickson, Rovi

There are no critic reviews yet for Dead Silent. Keep checking Rotten Tomatoes for updates!

There are no featured audience reviews for Dead Silent at this time.