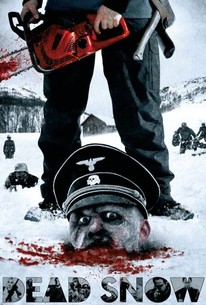 Though it doesn't cover new ground, Dead Snow is an entertaining mix of camp, scares, and blood and guts.

Eight medical students on a ski trip to Norway discover that Hitler's horrors live on when they come face to face with a battalion of undead Nazi soldiers intent on devouring anyone unfortunate enough to wander into the remote mountains where they were once sent to die. It's Easter vacation, and what better way to spend the break than skiing down the isolated hills just outside of Øksfjord, Norway? After packing their cars with enough beer and ski equipment to ensure that a good time will be had by all, the students set out for their destination and prepare for a relaxing snowbound getaway. Shortly after arriving at their remote cabin, however, the students receive an unexpected visit from a rather suspicious hiker. According to their shady visitor, the Nazis occupied this territory during World War II. In the aftermath of their brutal raping and pillaging, the locals revolted, driving the few surviving Nazi soldiers -- including their iron-fisted leader, Colonol Herzog -- deep into the hills. Neither the soldiers nor their leader were ever seen again. Everyone in town assumed that they simply froze to death. But there's something stirring out there in the trees, and it won't be long until the unsuspecting students discover how the story really ends. ~ Jason Buchanan, Rovi

Critics Consensus: Year One Fails To Beget Laughs
View All