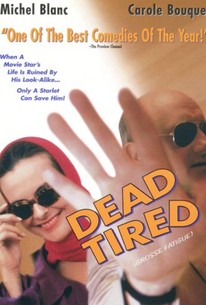 A burned out actor begins to question his sanity in this French comedy that stars the writer/director Michel Blanc in a dual role. In the first role Blanc plays himself as an exhausted actor. He has been doing too much TV and too many movies. Odd things begin to happen and Blanc becomes convinced his sanity is slipping away. He is seen going berserk at Cannes with a series of starlets. At Cannes, he meets festival head Gilles Jacob whom he persuades to give the room number of Gerard Depardieu. After Blanc is accused of attempted rape, he goes to a psychiatrist who prescribes peace and quiet in the country. He goes to the Provencial estate of his friend Carole Bouquet. It is there Bouquet and Blanc meet Blanc's devilish double Patrick Olivier. After a lengthy chase the two sit down and decide that Blanc will take only the high quality roles while Olivier will do the rest.

Charlotte Gainsbourg
as Herself

Mathilda May
as Herself

Thierry Lhermitte
as Himself

Roman Polanski
as Himself

Philippe DeJanerand
as The Inspector

Jean-Louis Richard
as The Psychiatrist

David Hallyday
as Himself

Gilles Jacob
as Himself

David Halliday
as Himself

Dominique Lavanant
as Herself
View All