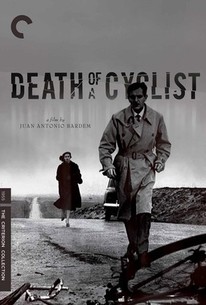 An adulterous couple is forced to take responsibility for their actions in this tense drama from Spanish filmmaker Juan Antonio Bardem. Maria Jose (Lucia Bose) is a beautiful woman whose husband Miguel (Otello Toso) is a wealthy and powerful businessman. Juan (Alberto Closas) is a mathematics instructor at a Spanish college who is distantly related to Miguel, and owes his position to Miguel's influence. Juan was also Maria Jose's boyfriend when they were younger, and now they're carrying on an affair behind Miguel's back. One night, while driving home from an assignation, Juan and Maria Jose accidentally run over a man on a bicycle; the stranger quickly dies, and the lovers speed away rather than deal with the consequences. But over the next few days, Juan's conscience begins to bother him, and finds it hard to bear the knowledge that he took another man's life. Maria Jose is also troubled, but for different reasons; Rafa (Carlos Casaravilla), a devious socialite, infers to Maria Jose that he knows about her secret life, but she's not certain he he's just speaking about her infidelity or her role in the cyclist's death. A major critical success in Spain, Muerte de un Ciclista (aka Death Of A Cyclist) was released in Europe in 1955, the same year director Bardem published a controversial essay on the decline in Spanish cinema under the rule of Franco. ~ Mark Deming, Rovi