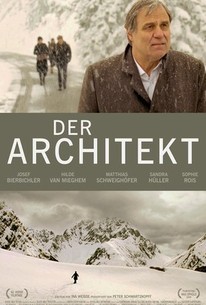 A middle-aged man comes home to finds himself confronted by the demons of his past in this drama from German filmmaker Ina Weisse. Georg Winter (Josef Bierbichler) comes back to the town where he was born for the first time in years when his mother dies. The visit comes when Georg's marriage to Eva (Hilde van Mieghem) is beginning to fray, and his teenage son and daughter Jan (Matthias Schweighoefer) and Reh (Sandra Hueller) aren't getting along with anyone. After a difficult journey, Georg and his family meet longtime family friend Hanna (Sophie Rois), and a long-held secret is revealed -- when they were younger, Georg and Hanna were lovers, and he is the father of teenage son Alex (Lucas Zolgar). Eva is shocked and angered by this revelation, and her mood turns darker when she learns Georg's mother has left the family home to Alex in her will. Der Architekt (aka The Architect) was an official selection at the 2009 Rotterdam International Film Festival.

There are no critic reviews yet for Der Architekt (The Architect). Keep checking Rotten Tomatoes for updates!

There are no featured audience reviews for Der Architekt (The Architect) at this time.