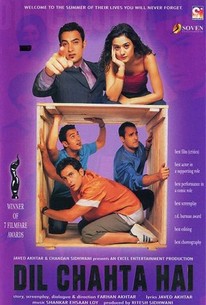 As Dil Chahta Hai opens, Siddarth, known as Sid (Akshaye Khanna) is racing to the hospital due to an unexplained emergency. There, he is reunited with his old friend, Sameer (Saif Ali Khan). Sameer calls the third member of the trio, Akash (Bombay superstar Aamir Khan from Lagaan), who tells him he's not going to join them at the hospital, due to an unresolved dispute between him and Sid. The film then flashes back to earlier, happier days, to show us what came between the three close friends. Sid was the studious, serious one, with a hidden artistic side, while Sameer foolishly let himself be ruled by the woman in his life. Akash could never limit himself to one woman. He was a playboy who claimed he didn't believe in love. Sameer found himself unexpectedly falling for Pooji (Sonali Kulkarni of Mission Kashmir), the young woman his parents have tried to arrange for him to marry. Akash's father grew concerned about his son's immaturity, and sent Akash to Australia to work for his company. There, he ran into Shalini (Preity Zinta, who also starred in Mission Kashmir), a girl who once rejected him in a Bombay nightclub. She's engaged to be married to Rohit (Ayub Khan), but as the two spend time together, Akash falls hard for Shalini. For his part, Sid met a beautiful divorcee, Tara (Dimple Kapadia), but his friends and family weren't ready to accept their relationship. Eventually, we work our way back to the present, and find out what's become of the three friends and their romantic entanglements. Dil Chahta Hai, a huge hit in India, marked the feature debut of writer-director Farhan Akhtar.

Suchitra Pillai
as Priya
View All