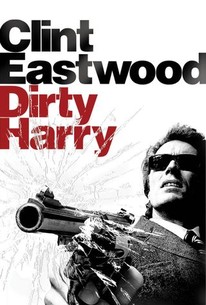 As tough and taciturn as its no-nonsense hero, Dirty Harry delivers a deceptively layered message without sacrificing an ounce of its solid action impact.

"You've got to ask yourself a question: 'do I feel lucky?' Well, do ya, punk?" Dirty Harry provoked a critical uproar in 1971 for its "fascist" message about the power of one, as it also elevated Clint Eastwood to superstar status through his most enduring screen persona. Harry Callahan (Eastwood, in a role meant for Frank Sinatra) is a sardonic, hard-working San Francisco cop who can't finish his lunch without having to foil a bank robbery with his 44 Magnum, "the most powerful handgun in the world." When hippie-esque psycho Scorpio (Andy Robinson) goes on a killing spree, Harry and new partner Chico (Reni Santoni) are assigned to hunt him down, but not before the Mayor (John Vernon) and Lt. Bressler (Harry Guardino) admonish Callahan about his heavy-handed tactics. Racing against a deadline to save a kidnap victim from suffocating to death and unbothered by the niceties of Miranda rights and search warrants, Callahan brings in Scorpio, only to see him released on technicalities. "The law's crazy," opines Harry in disgust, before taking it upon himself to ensure that Scorpio doesn't kill again. Directed in violent and efficient fashion by Don Siegel, with a propulsive score by Lalo Schifrin, Dirty Harry was the fourth Siegel-Eastwood collaboration after Coogan's Bluff (1968), Two Mules for Sister Sara (1970), and The Beguiled (1970). Critics at the time strongly objected to the heroic image of a cop's violations of a suspect's Miranda rights, forcing Siegel and Eastwood to deny that they were right-wing reactionaries. All the same, Dirty Harry proved to be highly popular and spawned four sequels: Magnum Force (1973), The Enforcer (1976), Sudden Impact (1983), and The Dead Pool (1988). ~ Lucia Bozzola, Rovi

Bob Harris
as Man in Truck

Joe Finnegan
as Man in Truck
View All