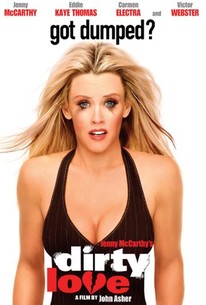 The laugh-free Dirty Love is a comedy dead zone -- it's aggressively crude and shoddily constructed.

A sexy woman discovers just how hard it can be to find a worthwhile man in this outrageous romantic comedy. Rebecca (Jenny McCarthy) is a beautiful blonde who thinks she has it made with her hunky boyfriend, Richard (Victor Webster); however, when she comes home early one day and finds him in bed with another woman, she realizes that isn't quite the case. Devastated, Rebecca takes the advice of her friends Carrie (Kam Heskin), a half-bright actress, and Michelle (Carmen Electra), a racially confused beautician, and throws herself back into the dating game to prove to Richard that she can do better. However, there's a problem -- Rebecca is a bit of a klutz, she keeps ending up with men who are either crazy or strange, and each date she goes on ends in disaster. Does Rebecca have any chance at either finding new love or winning Richard back? And is it possible her pal John (Eddie Kaye Thomas) might be interested in being more than just friends? Dirty Love was written by leading lady Jenny McCarthy and directed by John Asher, McCarthy's then-husband. ~ Mark Deming, Rovi

Judith Benezra
as Off. Davis

David Zappone
as Off. Hooker

Cris Borgnine
as Off. Ellis

Coyote Shivers
as Himself