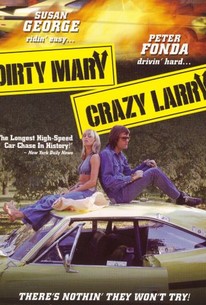 Three outlaws hit the road until the road hits back in this supercharged action thriller. Larry (Peter Fonda) is a stock car driver whose reckless nature has caused him a long run of bad luck. Larry and his friend and mechanic Deke (Adam Roarke) need money if they're to get a new car and get back in competition, so they map out a plan to hold up a grocery store after 150,000 dollars has been dropped off for payroll and working cash. The heist goes as planned, except for one little hitch -- Larry spent the night before with his occasional girlfriend Mary (Susan George), and she has planted herself in Larry's car and isn't about to budge. With Mary along for the ride, Larry and Deke try to outrun the cops and make their way to freedom, though lawman Franklin (Vic Morrow) is determined to shut them down. Much loved by both gearheads and action film fans for its hair-raising stunt work and solid performances from the leading cast, Dirty Mary, Crazy Larry was a surprise box-office hit in 1974, grossing nearly 30 million dollars in its initial release. Roddy McDowall appears uncredited as the manager of the supermarket. ~ Mark Deming, Rovi

Thomas Castranova
as Steve
View All