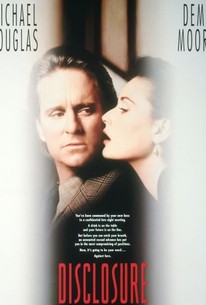 Michael Douglas runs afoul of a treacherous supervisor in this film version of Michael Crichton's novel. Douglas plays Tom Sanders, an executive at DigiCom, a leading computer software firm. DigiCom is about to launch a new virtual reality-based data storage system that is expected to revolutionize the industry, and Bob Garvin (Donald Sutherland), the owner of the company, is in the midst of negotiating a merger that could bring $100 million into the firm. However, while Tom is expecting a promotion, he discovers the position has been given instead to a new hire, Meredith Johnson (Demi Moore), with whom Tom had an affair years ago, before he was married. After her first day of work, Meredith invites Tom up to her office and makes a concerted attempt to seduce him; while Tom doesn't fight off her advances with very much gusto at first, eventually he decides things have gone too far and leaves in a huff. The next morning, Meredith accuses Tom of sexual harassment, and he realizes this was merely a power ploy to get him out of DigiCom for good; Tom, determined to fight, files a counter-suit, which makes him no friends at the company, since rocking the boat too hard could very well scotch the merger. Dennis Miller also appears as one of Tom's wise-cracking co-workers.