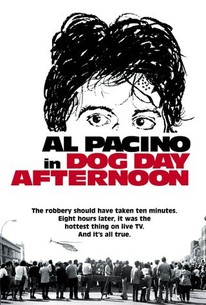 Framed by great work from director Sidney Lumet and fueled by a gripping performance from Al Pacino, Dog Day Afternoon offers a finely detailed snapshot of people in crisis with tension-soaked drama shaded in black humor.

Based on a true 1972 story, Sidney Lumet's 1975 drama chronicles a unique bank robbery on a hot summer afternoon in New York City. Shortly before closing time, scheming loser Sonny (Al Pacino) and his slow-witted buddy, Sal (John Cazale), burst into a Brooklyn bank for what should be a run-of-the-mill robbery, but everything goes wrong, beginning with the fact that there is almost no money in the bank. The situation swiftly escalates, as Sonny and Sal take hostages; enough cops to police the tristate area surround the bank; a large Sonny-sympathetic crowd gathers to watch; the media arrive to complete the circus; and police captain Moretti (Charles Durning) tries to negotiate with Sonny while keeping the volatile spectacle under control. When Sonny's lover, Leon (Chris Sarandon), tries to talk Sonny out of the bank, we learn the robbery's motive: to finance Leon's sex-change operation. Sonny demands a plane to escape, but the end is near once menacingly cool FBI agent Sheldon (James Broderick) arrives to take over the negotiations. ~ Lucia Bozzola, Rovi

Thomas Murphy
as Policeman with Angie