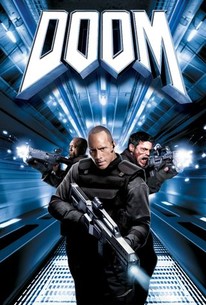 The FPS sections are sure to please fans of the video game, but lacking in plot and originality to please other moviegoers.

One of the most popular and influential video games ever makes its way to the big screen in this sci-fi thriller. A coalition of Earth's scientific and military interests have established a research colony called Olduvai on the planet Mars, but one day all communication from the outpost stops and no one can tell what has happened -- though the final messages suggest it's not good. Believing foul play may have overtaken Olduvai's crew, the Rapid Response Tactical Squad, a team of specially trained military personnel, are deployed to investigate the situation and, if necessary, eliminate the invaders. But Sarge (Dwayne Johnson, aka The Rock) and Reaper (Karl Urban), leaders of the RRTS team, soon discover the situation is far more grim than they could have imagined. An experiment on Olduvai has very literally opened a portal to Hades, and a variety of savage and demonic creatures have overtaken the colony. Now the RRTS must seal off Olduvai, close off any access to Earth, and exterminate the satanic beasts before they can kill again. Doom also stars Rosamund Pike (as Dr. Grimm), Dexter Fletcher, Ben Daniels, and Deobia Oparei. ~ Mark Deming, Rovi

Al Weaver
as The Kid

30 Great Scenes in Rotten Movies
10 Awesome Video Games That Were Made Into Terrible Movies
Box Office Guru Preview: Eastwood vs. Scorsese – Round 2
View All