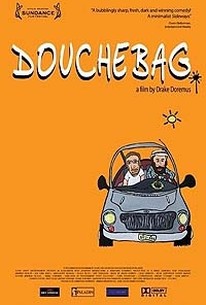 A loud-mouthed lout has a less than cordial reunion with his brother in this independent comedy drama from director Drake Doremus. Sam Nussbaum (Andrew Dickler) is an insufferably opinionated loser who has somehow managed to charm a beautiful young woman, Steph (Marguerite Moreau), who has agreed to marry him. Steph is puzzled when she learns that Sam hasn't invited his brother, Tom (Ben York Jones), to the upcoming wedding; Sam doesn't want to talk about it, so Steph decides to surprise her fiancé by arranging for Tom to come to Los Angeles, where the couple lives. Sam and Tom had a falling out years before that neither of them likes to talk about, and as the siblings get reacquainted, the emotional distance between them is clear. When Tom mentions in passing that the only girl he ever loved was a classmate from grade school, Sam insists they drop everything and set out to find her; this leads to a grand-scale road trip that at once brings the brothers together and reinforces their opinions of one another, while also giving Sam a reason to postpone a wedding he no longer wants. Douchebag received its world premiere at the 2010 Sundance Film Festival.

Critics Consensus: The Social Network Is One Of The Year’s Best
View All

There are no featured audience reviews for Douchebag at this time.