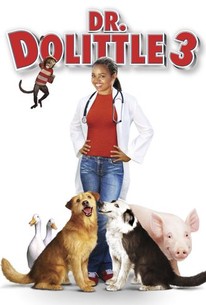 A young woman discovers that her father's special talent runs in the family in this direct-to-video sequel to the 1998 blockbuster (which, unlike the previous two films in the series, does not feature Eddie Murphy). Maya Dolittle (Kyla Pratt), the youngest daughter of veterinarian John Dolittle, makes the surprising discovery that, like her dad, she can understand what animals have to say, and speak with them in their own language. Unlike her father, Maya hasn't found a suitable use for her talents, and as she finds an outlet for her unique language skills, she is sent away to Durango, a combination summer camp and dude ranch, where she strikes up a rapport with both the fellow campers and the livestock. When she learns that Durango is on the verge of going out of business due to money problems, Maya starts working with the camp's horses and cattle, giving them a much needed pep talk as they're entered in a local rodeo that could save Durango. Dr. Dolittle 3: The Daughter Is In also features Kristen Wilson, John Amos, and Walker Howard. ~ Mark Deming, Rovi

Calum Worthy
as Tyler
View All